I don’t know why I said that, I had barely made anything more than a single cake from a Pillsbury premix in a cooker. It was 2011, the summer vacation after 10th standard when I went for my first baking class in the apartment. Bina Aunty laughed and looked at me, as I sat between her other students who were all aunties thrice my age.

“Opening a bakery isn’t that easy” she grinned and said. But after that sentence, she took me under her wing. I had enrolled in her 10-day workshop and every evening I’d go buy ingredients for the things she taught that day and replicate the recipe at home. From butter cookies to chocolate cake, I’d try to make everything again without egg and go to her house with a piece of my attempt for her validation. 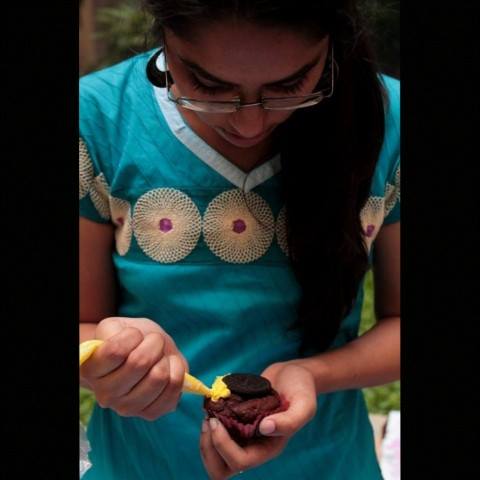 She’d often say it isn’t the same if you don’t use egg, but my father would never allow eggs in our home. It didn’t matter what I made, when I brought it to my dad he’d act as though it was the best thing he had ever tasted in his entire life. Even today, if I attempt to make rotis, he’ll say, “Megna this is so round you can measure it with a compass.” As a child, if I ever said Papa I can’t dance, he would angrily reply, “Who is telling you this nonsense? You can do whatever you want to do.”

For the next 10 years after the class, whenever Bina Aunty met me with another person in the elevator – she would say, have you met Megna? She’s been my best student.

I had never been anybody’s best student before. Up till that day, despite my father’s encouragement, I had always felt that I wasn’t good enough. We were a group of five friends in school and the other four were all in dance troupes and the basketball team. I’ve always adored them and would cheer for them by the side lines. They would stay back for practice and I’d have to go home. They’d travel across the country playing basketball and I’d have to attend class.

Perhaps it was because baking was the only thing that I presumed didn’t have any competition, that I said I wanted to open a bakery. Whenever I baked something, it was always appreciated, not because I was the best but because nobody else around me was doing it. Whatever the reason, I announced a decision way back in 2011 that I had no idea how to follow through. I tend to make most decisions without a plan and feel accountable when I say them out loud. Much like this blog that I announced on Instagram 2 days ago, I’ve never read or written blogs in my life – and suddenly I just went out and made a video about it on social media.

I’m a believer that when you want something will all your heart, the universe will come together to make it happen. Maybe because I watched The Secret (it’s a little dramatic but I’d recommend that everyone watches it). Or maybe it was because Shah Rukh Khan said it in Om Shanthi Om, although I really wish it was Hrithik Roshan instead haha!

As I went back to school after that baking summer vacation, something had changed. I had found an identity that was more than my long hair and squeaky voice. So, when it was time to draw up an imaginary business plan for our accounting project, our group made one about a girl who opens a bakery.

Her name was Saachi and it was called Pastry Perfections. Saachi was the name I always used for any school project, she is one of my childhood friends and although she is only 3 months younger than I am, it seemed like she was the littlest baby of our circle. That same kiddo went on to design the most beautiful logo for Dream a Dozen a few years later, but that is a story for another time.

Our accounts teacher was thrilled to read the project and kept asking when I’m going to give her baking lessons. This was the second time someone apart from my parents showed belief in my abilities and sometimes that is all you need to strengthen your resolve. In the same year, I went on to write my dream in the year book as “I want to be an awesome pastry chef.” Little did I know, I was probably never going to be a chef.

Fast forward to 2014, I was at a sleepover at Aroma’s house. Aroma’s been one of my best friends since we were 6 years old and she will be the first person to tell me off if something isn’t right. I had this image in my head of a future cupcake shop that also had a photo booth, so we named it - The Cupcake Booth.

Anyhow, coming back to the sleepover – she opened her laptop and we quietly celebrated that we could get a Gmail ID with the username “thecupcakebooth.” And then we started a Facebook page with the same name. Fully equipped with a google and FB account, we decided that we had started a business. We were going to take orders, I would bake, Aroma would manage marketing and Rea (my other best friend).

I started obsessing about cupcakes, reading up about all the different things that were happening in the world. It was then, that I discovered Shark Tank through wicked good cupcakes. This was much before it aired on Indian television, I just watched hours of it on the weekends on YouTube. I had also been watching MasterChef Australia. Both shows together proved to be a combination that will make you believe that anything is possible, much like my father.

Aroma, Rea and I became a power team – we wrote detailed business plans about opening cupcake food trucks together. We’d start each presentation by saying, “Some people may think that a cupcake is just a bit of flour, butter and sugar but our customers, our team and I know that it is much more than that. Good morning, my name is…” The practice sessions of saying this line a thousand times still rings in my head like it was yesterday. The story of our college-cupcake life is one that deserves a separate blog post in itself because I have a lot of photos and presentations that I’d love to show you.

Today, the same friends that I was cheering for from the side lines when I was 15 – are right by my side building this business with me as I’m turning 25. Yes, I’m the only founder, but there is nothing that I have done alone. Even last night, Aroma was designing this blog with me. As I complete my first post, I’m going to send a copy right away for her approval.